What I Really Want

Nine years after taking her Bachelor’s degree, Ingrid Aarvik Berge returned to take a Master’s degree at the Art and craft department – and the result is truly worth a look.

“There has been so much that I’ve wanted to do that at times it has been hard to find out what I really want,” she says. “But when I look back, everything actually seems to fit in.”

Ingrid is taking a Master’s degree in Medium and Material based Art, and over the past year she has participated in two major exhibitions, one of which led to a public commission while the other one led to her work being acquired by Nordenfjeldske Kunstindustrimuseum (the National Museum of Decorative Arts and Design). She knew already early on that she wanted to study and work professionally with art, but she has spent a long time finding out exactly what her artistic project should be.

“I studied art in high school and thought about applying directly to KHiO, but my guidance counsellors advised me to attend a preparatory school first,” she recalls. “I hadn’t heard about such schools before, and so it actually felt a bit insulting that they thought I shouldn’t apply directly to KHiO. But I’m very happy that I went to Einar Granum here in Oslo first – going to school there was fantastic, and it gave me a solid foundation to attend KHiO. The experience you get at a preparatory school makes it easier to understand how to make the most of all the wonderful and wide-ranging things that KHiO has to offer, because it’s very open-ended here and you can feel a bit overwhelmed.”

After studying at Einar Granum, Ingrid was admitted to KHiO’s Print and drawing programme.

“When I was studying, I was also active in the band Norma Sass,” she recalls. “We won the Zoom Urørt tour that NRK P3 organised for unsigned bands. Clearly, this was an incredible opportunity, so I toured Norway and held 50 concerts throughout the entire country, in addition to studying. I almost failed my classes, but I just managed to pass! Even though I meandered a good deal when I studied, I’m still very happy to have a background in printmaking.” 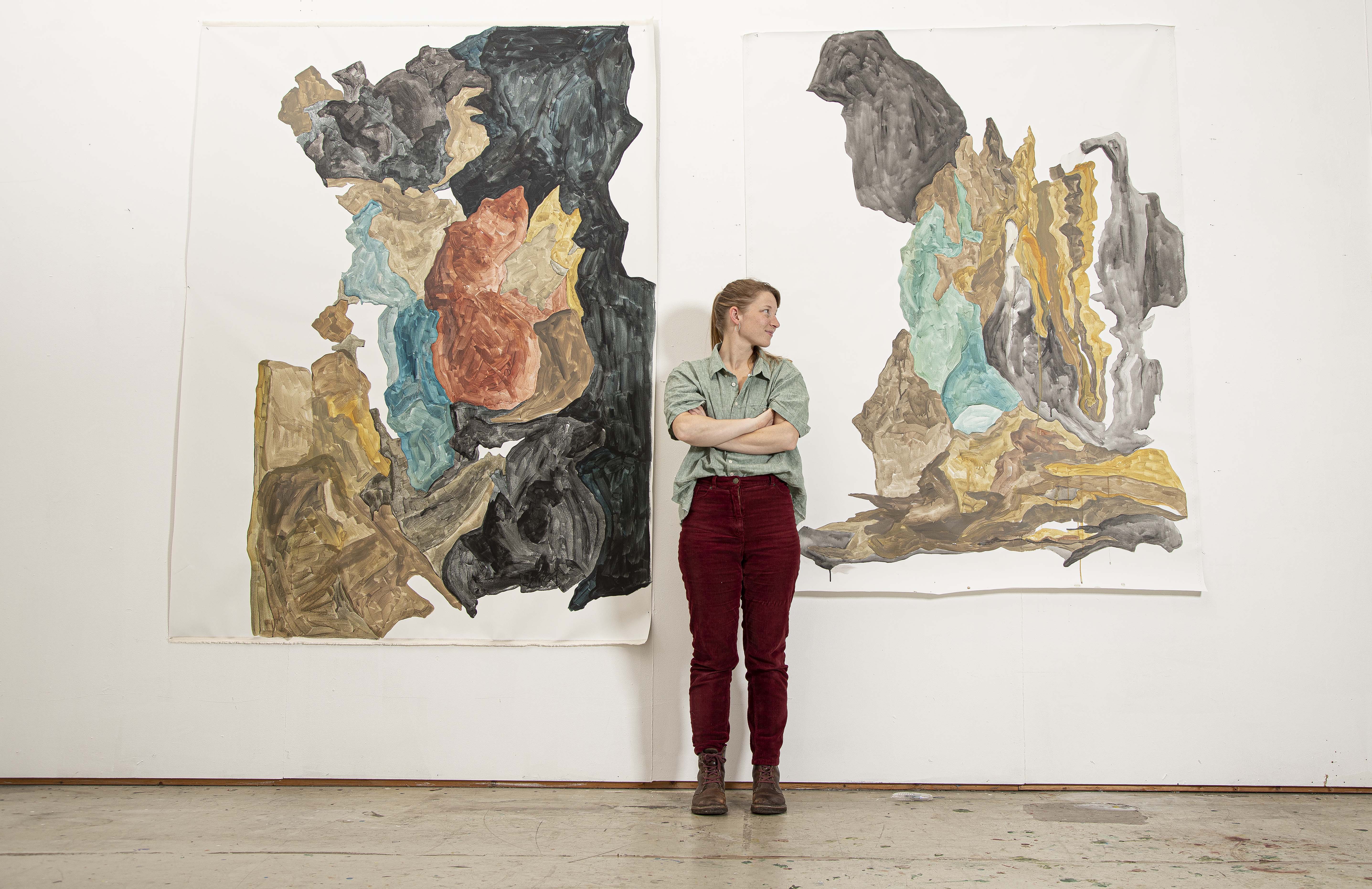 When everything suddenly clicks

Ingrid works on textile intarsia and seems almost to be painting with fabrics. She dyes the fabrics herself and sews them together by hand.

“I began working as an assistant to  Inger Johanne Rasmussen, who has a studio on Hovedøya in the Oslofjord,” she explains. “It’s because of her that I began working with fabrics. She taught me to dye fabrics using a technique that allows me to transfer a painting to fabric by building up planes, almost like in prints. Suddenly it fit really well that I had previously studied printmaking.” 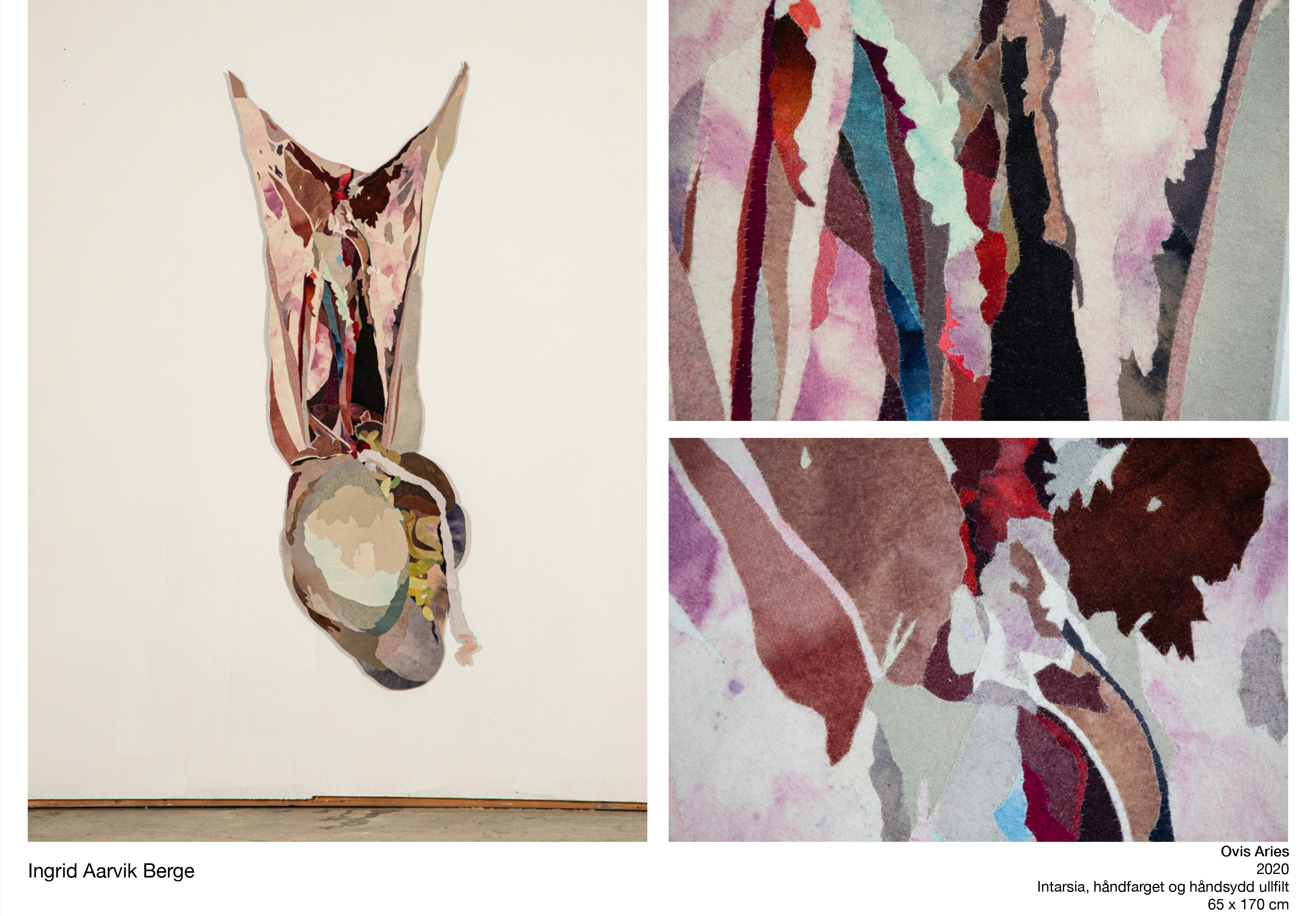 What themes do you explore in your art?

“To answer that, I have to begin by talking a bit about the years between my Bachelor’s at KHiO and meeting Inger Johanne, so that things will be easier to understand. Along with my boyfriend, who is a musician, I moved from a small flat in the Grønland neighbourhood in Oslo to the rural district of Värmland in Sweden in 2013. We had to start from scratch there. The small farm we lived on hadn’t been cultivated for quite some time, so we spent a lot of time on digging and on creating a vegetable garden. We built a chicken coop and bought hens, and after a while also sheep and bees. We were total newbies, but we had watched a few TV programmes and saw on YouTube how things could be done. I should also mention that we didn’t have any internet and that the phone connection was terrible. We had to buy dairy products from the local shop since we didn’t have cows ourselves, but otherwise we were more or less self-sufficient. This changed everything for me – it changed my view of things around us and especially the issue of biodiversity. We lived so close to nature and suddenly city life seemed a bit meaningless. A city is a gigantic, manmade, artificial landscape. More or less everything is set up there for us to buy stuff.”

Even though Ingrid did carry out a few intermittent art projects during this time, and also worked as a freelance illustrator designing record covers and posters for acquaintances in the music business in Oslo, it was not until she started working as an assistant to Inger Johanne Rasmussen that she truly reconnected with art.

“Working with fabrics chimed really well with the themes I’m interested in, which pertain to life on the farm and how we use – or abuse – nature,” she explains. “For me, our era marks a juncture in history where the natural and the manmade are no longer separable. At the same time, there is a kind of peak to how far away from nature people have distanced themselves. Along with my own experiences from the years spent on our farm in Sweden, this is what underpins everything I’m doing right now. And that’s what made me feel like it was the right time to take a Master’s.” 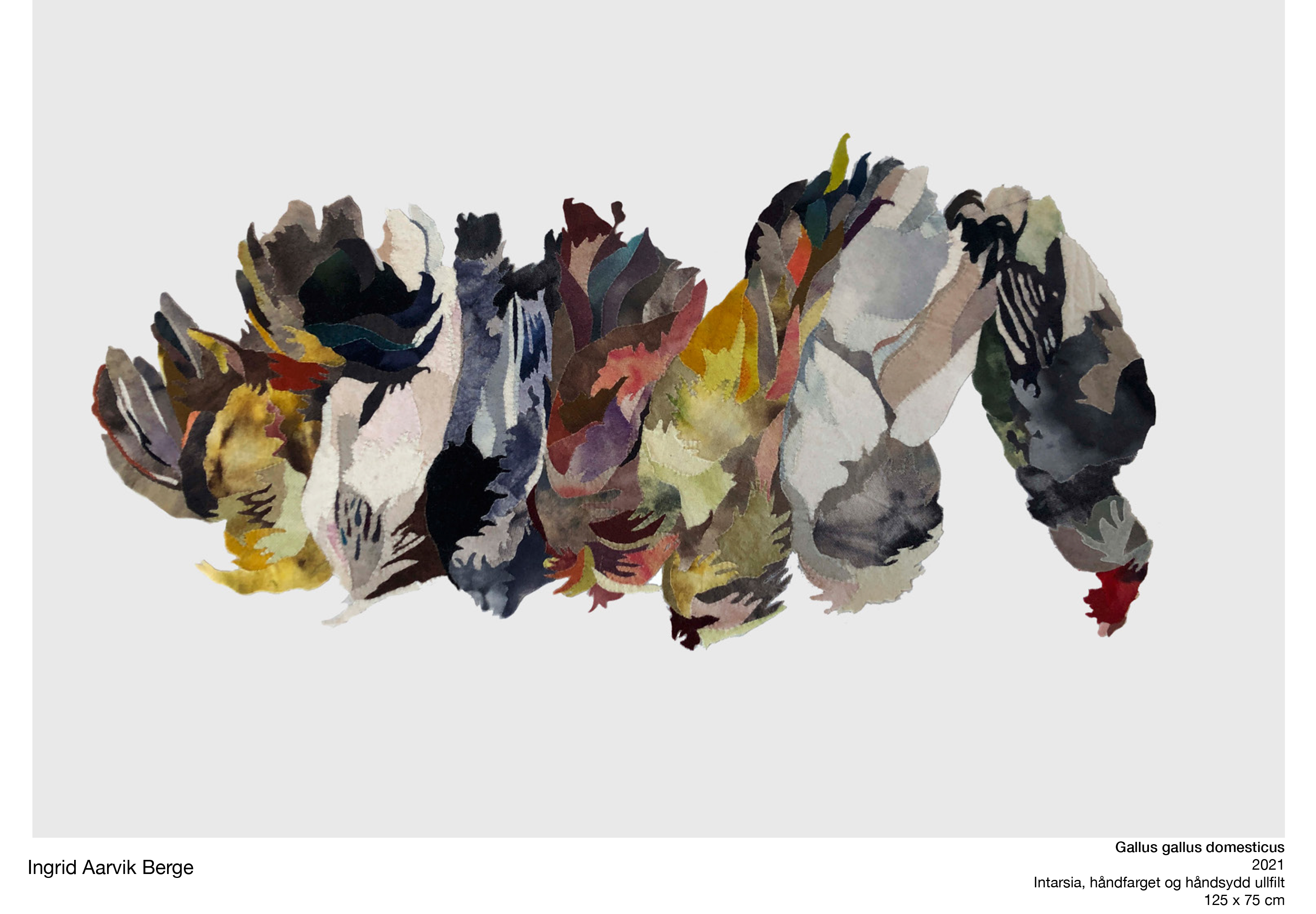 The beginning of an artistic career

In 2018 the couple moved back to Norway and settled in Fredrikstad, about 90 km southeast of Oslo. Berge’s boyfriend found a job as a city farmer at Losæter in Oslo.

“We have two kids who go to a nursery in Fredrikstad. I wouldn’t really recommend being a parent and living somewhere else than where you’re studying, but that’s just the way things are for us. I also have a studio in Fredrikstad, a large one, so I have ample space to cut fabric and work on my projects. During my process I sometimes need a lot of space, especially for large-scale works. When I’m commuting in to KHiO, I roll up my work and hitch a ride with my boyfriend in our electric car. I have a bike at Losæter, so I can bike to school from there with my work and then continue sewing on it here. I also use the dyeing workshop at KHiO – that is a true luxury. Studying at KHiO this time around is very different from the first time I was here. I have a much greater appreciation of how privileged we are here, and I’m inspired to do so much. My creative juices have really been unleashed after I began studying here again.” 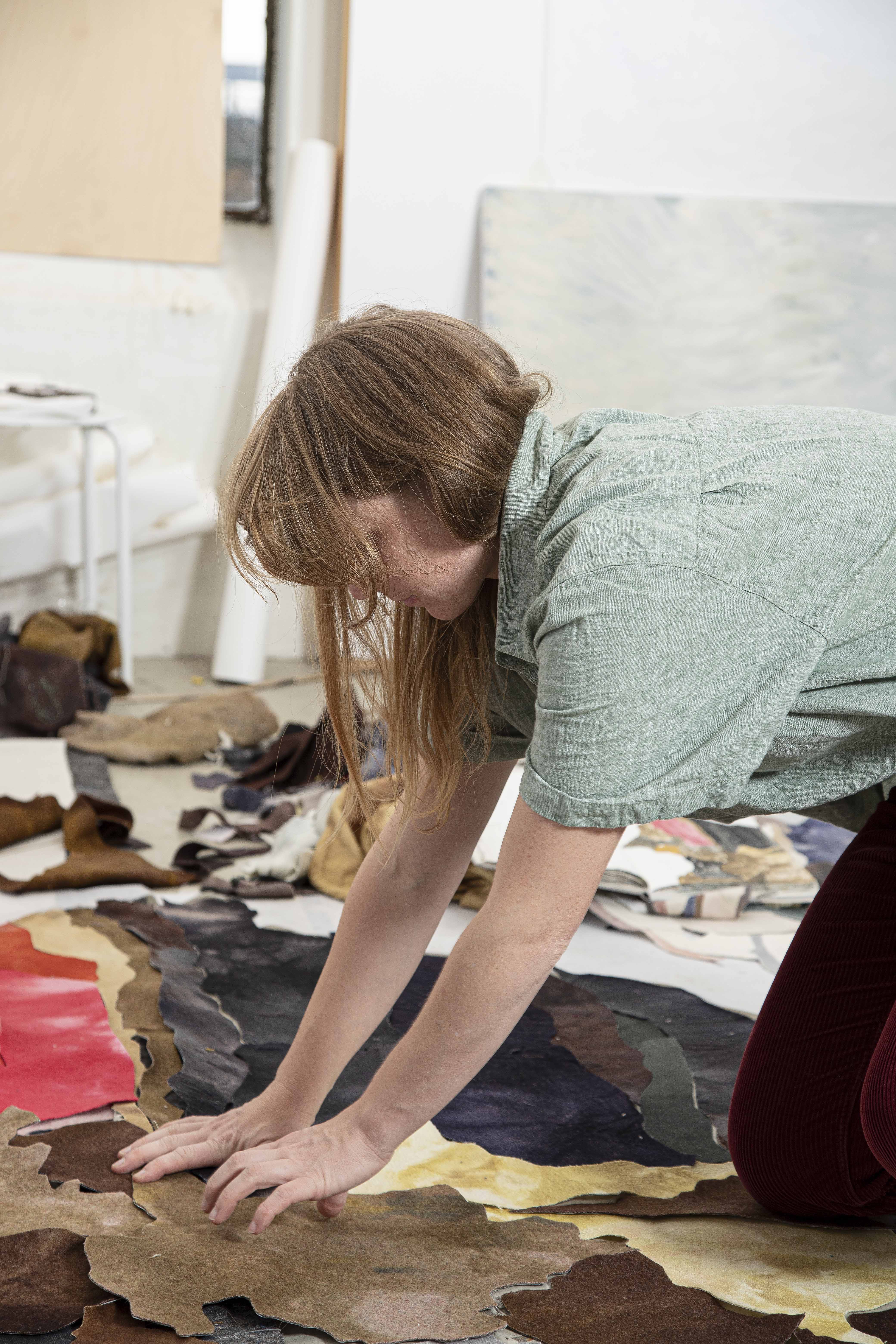 You have been commissioned to do a public decoration. Can you tell us about that?

“This spring I participated at a regional exhibition for Eastern Norway with my piece Field Work,” Berge says. “Unfortunately, the Covid-19 pandemic meant there were few visitors, but the organisers did produce a catalogue. The arts agency Mesèn, saw this catalogue, and they contacted me and gave me the chance to create a piece for a nursing home in Fredrikstad next spring. Just across the road from the nursing home there is a protected wetland that serves as the habitat for a great many birds, including red-listed ones, and this area inspired me in my work. I’m interested in red-listed birds and wanted to explore them in my work. My artistic expression can be understood as a landscape, but one that is locally rooted, such as in Field Work. The plan is for it to hang in a room that is to be used for ceremonies at the nursing home.”

You’ll be finishing your Master’s at KHiO this spring. Have you planned your graduation project yet?

“I haven’t planned it completely yet, but I do know that it will be a project that combines painting and textile art. Even though we’ve moved to Fredrikstad, we have kept our farm in Sweden and try to use it as much as possible. We were there this past summer, and of course with two kids in addition I do only have a limited amount of time to spend on my projects, so the end result was that I largely just sketched in a pad in the evenings. And now I’m using these sketches as a basis for large-scale textile works and paintings. I notice that the textile art technique has influenced how I view the landscape – I see motifs everywhere. Before, I would often look intently at a photograph before creating something, but now I start working more immediately based on what I feel and on the way I’ve begun seeing the landscape in colours and planes. It’s a way for me to relate to nature and specifically to our farm. It is still really important to us.” 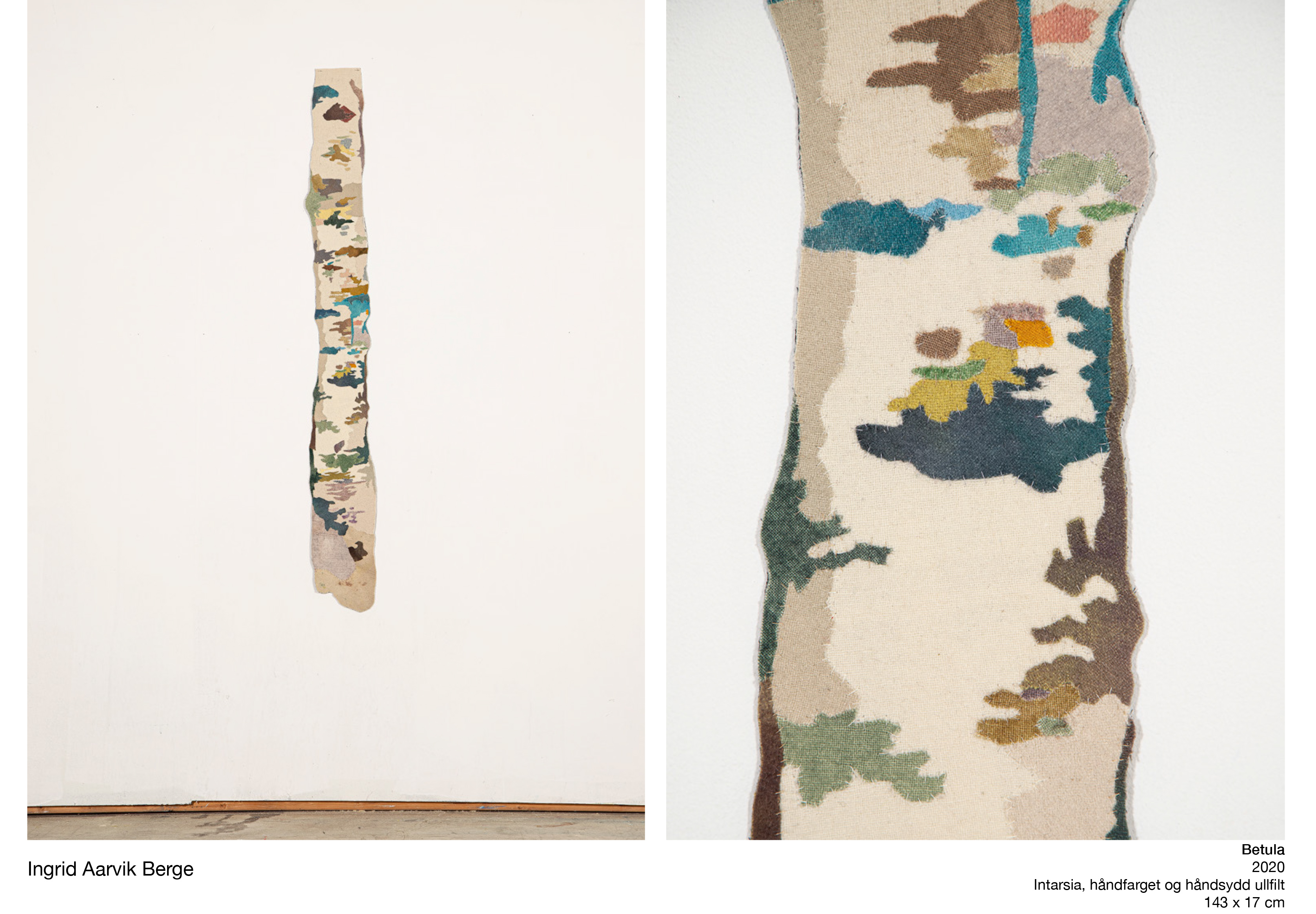 This autumn Ingrid has participated in the Annual Exhibition at SKMU in Kristiansand with the piece Alces alces.

“The image is of a butchered moose, inspired by the fact that I was on a moose hunt in the forests of Värmland. The piece deals with the symbiotic relationship between animals, the earth and us. The work’s Latin name refers to how people create systems in nature, for example by naming and classifying. This is our unique ability to construct truths, laws, order and hierarchies that are mostly based on humanity’s own terms. But what does it mean to be “wild”? The lengthy process and the time it takes to create the work perhaps underlines a reflection and a respect for the act and for the essence and life of the animal.”

The piece is not returning home with Berge after the exhibition, because it has now been acquired by Nordenfjeldske Kunstindustrimuseum in Trondheim. 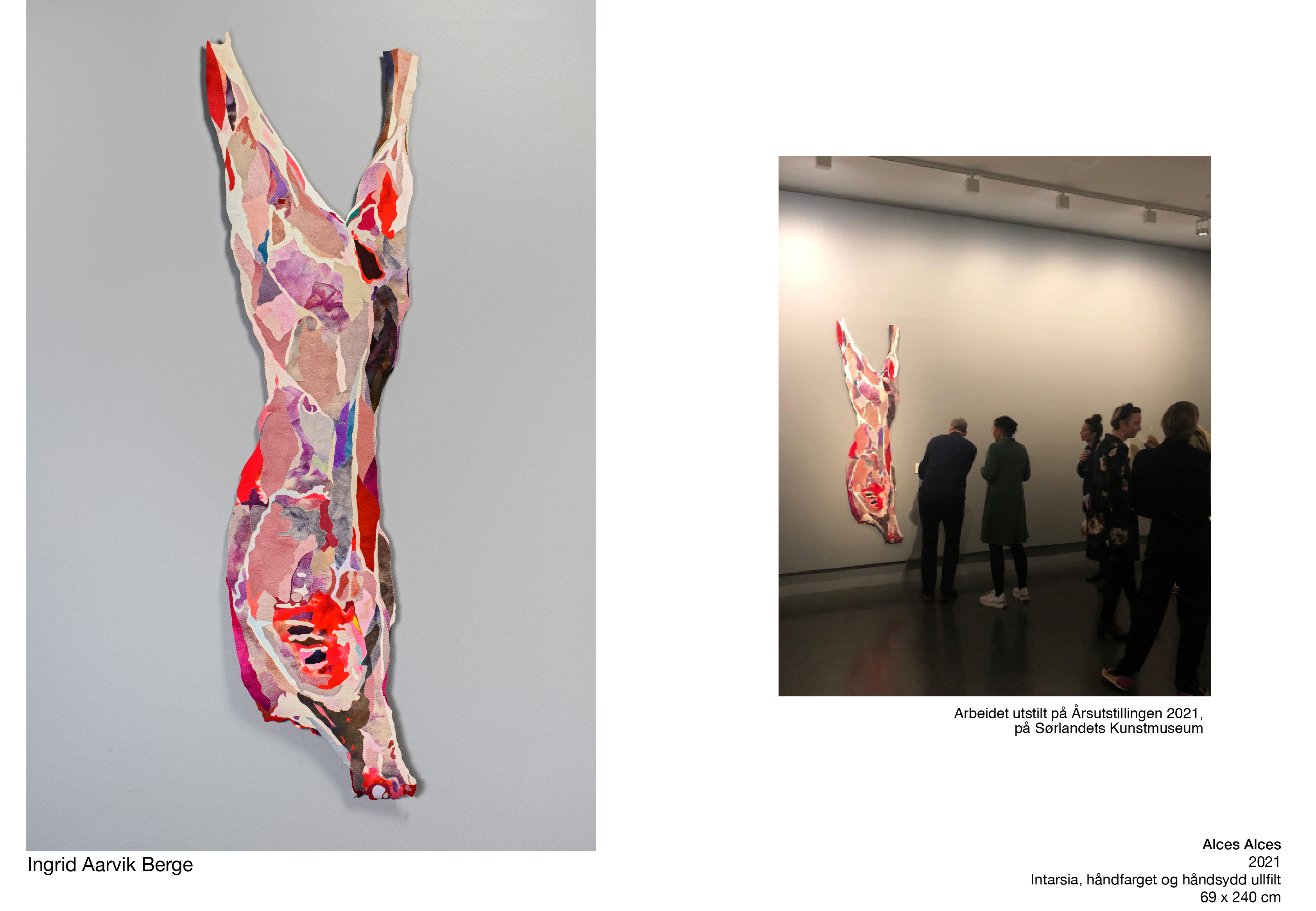 “When I finished my Bachelor’s in 2011, many of the others went straight for a Master’s, but I was still very young and didn’t entirely know what I wanted to do when I was finished, so I chose to wait. In hindsight I can say that is something I would definitely recommend – spending time on finding out what you want. I’ve returned to KHiO after finding a Master’s project I really want to throw myself into.”

By the way, I think we’ve left something out – didn’t you also receive a Spellemannpris [Norwegian music award] at some point?

“Yeah, I skipped that part,” she laughs. “That was with my second band The Switch, where I played the drums. We won a Spellemannpris in 2016.”

You have so many interests. Do you think you’ll continue with textile art, or is there yet another new thing you want to try out?

“I’m definitely going to stick with textile art. It’s been so nice to become a part of the textile art community here at KHiO. The theoretical programme here has also been entirely in line with my project, and even last year’s lab programme for textile art focused on nature. And I’m ecstatic about my supervisor, Gerd Tinglum, who is also a painter. So I feel there are many artistic impulses here that I can use in my own work. After being away from the artistic community for several years, the fact that I could make contacts and have colleagues again was also a good reason for choosing to take a Master’s degree.”